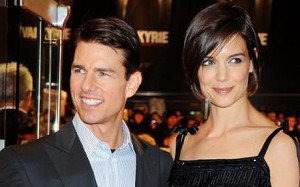 If you’re wondering why Johnny Depp and Vanessa Paridis — or Tom Cruise and Katie Holmes — chose the other as a partner, new research by the University of St Andrews in Scotland may suggest why: because women are most attracted to men who look like the masculine version of themselves.

The similarity in looks was a great comfort when it came to trust. The Telegraph reported:

Psychologists believe that the resemblance might cancel out any issues of mistrust normally associated with strong masculine characteristics.

Tamsin Saxton, a postdoctoral research fellow, said: “Previous research has often found that women can be attracted to masculine men, but also a bit suspicious of them.

“However, women tend to trust men more if they look like them. So perhaps the resemblance cancelled out the women’s suspicions.

The study’s methods were also described:

“Or maybe the women felt they were better matched with men who looked like them, because if two people resemble each other, they might both be attracted to each other.”

The research used computer digital techniques to manipulate men’s faces. Faces were made to look more or less masculine, and more or less like the women who rated them. Women rated each face for attractiveness.

In this case, it seems opposites do not attract.