Politicians’ gestures can reveal their thoughts, according to a new study published in the open-access journal PLoS ONE.

“In laboratory tests, right- and left-handers associate positive ideas like honesty and intelligence with their dominant side of space and negative ideas with their non-dominant side,” says Daniel Casasanto of the Max Planck Institute for Psycholinguistics in Nijmegen, the Netherlands. To find out whether people link ‘good’ with ‘dominant’ beyond the laboratory, Casasanto and co-author Kyle Jasmin examined spontaneous gestures during positive and negative speech in the final debates of the most recent US presidential elections. 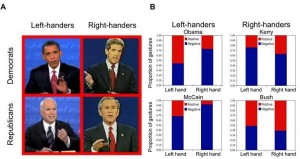 The 2004 and 2008 elections involved two right-handers (Kerry, Bush) and two left-handers (Obama, McCain). Casasanto and Jasmin found that right-handed candidates made a greater proportion of right-hand gestures when expressing positive ideas and left-hand gestures when expressing negative thoughts. But the opposite was found for the left-handers, who favored their left hand more for the positive and their right hand for the negative. Obama’s ‘right-hand man’ may be on his left.

Body-based conceptions of good and bad

Across many cultures, expressions in language link ‘good’ with right (the right answer) and ‘bad’ with left (two left feet). Likewise, classical treatises instruct politicians to gesture mostly with their right hand, and only to use their left hand when delivering bad news. These cultural conventions could explain the right-handers’ gestures in this study, but not the left-handers’. “Overall,” says Casasanto, “the data support the idea that people associate good things with the side of their body they can use most fluently — dominant is fluent, and fluent is good.”

‘Right’ and ‘left’ are also linked with political views, but the candidates’ spontaneous gestures did not follow party lines. Both right-handers showed the ‘good is right’ pattern, and both left-handers the ‘good is left’ pattern. The association of good things with one’s dominant side is something Democrats and Republicans appear to agree on.

Watch the hands to read the mind

For some speakers, the link between hand and positive-negative speech may be dramatic enough to observe with the ‘naked eye’, particularly in the non-dominant hand, which often makes fewer gestures overall. In these debates, non-dominant hand gestures occurred more often during negative statements than during positive statements by a ratio of about 2 to 1 for Obama, 3 to 1 for Kerry, and 12 to 1 for McCain. Watching politicians’ hands could help voters to know their minds.