Trends come and go (like the razor scooter), and this is no more apparent than on the internet. But according to a new study — and despite the loss of interest in MySpace — it looks like one trend is here to stay: social networking.

In a survey conducted by the Pew Internet and American Life Project, an overwhelming majority of technology experts and stakeholders believe that social networking and online sharing is more than just a fad for today’s youth.

More than two-thirds of those surveyed indicated that the Millennial generation — otherwise known as Generation Y — will continue to use social networking tools as they mature into adult life stages and have families of their own.

67% of experts concurred with this statement:

“By 2020, members of Generation Y (today’s ‘digital natives’) will continue to be ambient broadcasters who disclose a great deal of personal information in order to stay connected and take advantage of social, economic, and political opportunities. Even as they mature, have families, and take on more significant responsibilities, their enthusiasm for widespread information sharing will carry forward.”

Pew found that the experts believe the advantages and social benefits of sharing personal information online far outweigh the consequences, an attitude that these young “digital natives” will carry into adulthood. A survey response from a Mozilla programmer exemplifies this notion: “Unless Generation Y has a collective privacy-related epiphany, they will continue to happily trade it for convenience.”

Do you agree with the experts? 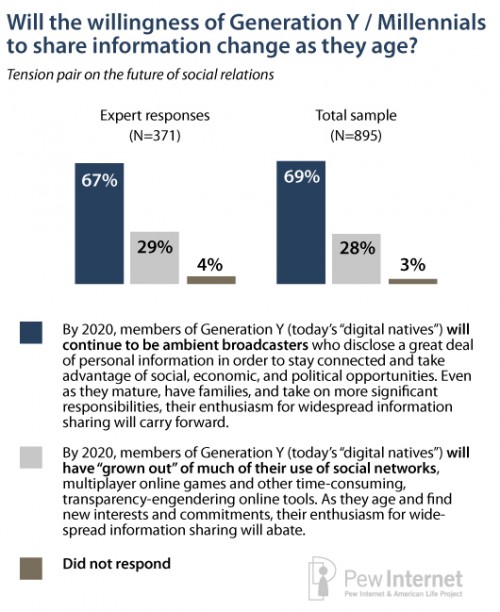