Nobody can deny that computer programs are becoming a much more common learning tool in schools today. As hard as it is to believe at one point in time, not too long ago, teachers were required to take their students for the mandatory “Computer Lab” session. This was primarily the only exposure to computers at the time. Technology was not as present in classrooms as it is today. A study recently conducted in Sweden found that children are not actually learning anything new with the various computer programs, apps, and digital technologies available to them. What exactly does this mean then? Does it mean school curriculum is becoming lazier as technology progresses? Does it mean that children are much more advanced than in the past? It is probably a combination of both with a few other factors mixed in. 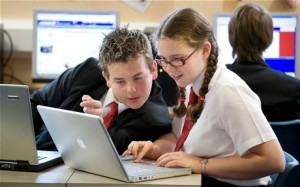 Researchers found that Swedish students are utilizing computer programs that do not challenge their thought processes but rather reinforces what they already know. It would then seem that students are not being taught any new content. Instead of teachers interacting with students in person, students are being forced to learn from technologies that are doing nothing in way of furthering their education. Out of 100 programs and apps that were analyzed based on the quality of the content, only 17 met the standards set out by the researchers. Many programs proved to have such poor quality that they never passed the preliminary steps of the study.

An estimated 90% of resources available online to help younger students were found to only test students on knowledge already established rather than helping them to learn new content. These testing tools provide no explanation as to why each answer is correct. The aim of the programs are to mainly beat the clock and not towards a better understanding of the content. All hope is not lost. These programs have the potential to be extremely beneficial learning tools. They have the ability to teach students content that may otherwise not be learned. Programs cannot act like an online version of a book; one dimensional and non-interactive. Going forward digital tools must provide the correct answer along with an explanation and feedback. Likewise, it would also be an ideal way to show students how you can think about questions and problems in different ways. It shows students that there is not just one way of thinking and communicating. It also has the potential to show students the consequences for performing certain actions which is not available when learning from a book. A perfect example of this would be the dreaded “If train A leaves at 10:30 am at 200 MPH and train B leaves at 10:45 am at 225 MPH, which train makes it to Ottawa faster?”

An experiment was conducted on two groups of students; one group used a program with a friendly character who followed them along their journey while the other did not. At the end each group had to take a math test. The group with the character were more motivated to do well on the test in comparison to the other group. Previously students were under performing in school suddenly became more motivated to do well when they had a character they could relate with and who helped them to complete the program. The research group from Sweden says that the first developer who makes a fully comprehensive and interactive program will likely gain control over the entire market for educational programs. Creating educational aids is no simple task; developers need to keep in mind that they are feeding the minds of those who will one day rule the country and economy.