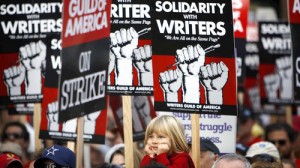 We tend to think television viewers would spend more time exercising or hanging out with friends if their TV was just turned off — but according to a new study by assistant professor of communication Emily Moyer-Gusé and former grad student Julie Lather of Ohio State University, that may not be the case. Their research surveyed the time of reruns during the television writers’ strike of 2007-08 and found that shows were just replaced by other media. They also found that these absences (dubbed ‘breakups’) in shows caused distress in those who felt close to their favorite characters.

One set of questions was designed to determine how close the participants felt to their favorite characters on television. For example, they rated on a scale of 1 to 5 how much they agreed with the statement “My favorite character makes me feel comfortable, as if I am with a friend.”

They were also asked several questions aimed at measuring how much distress they felt as a result of their favorite programs being disrupted by the writers’ strike. For example, they were asked to rate on a scale of 1 to 5 how much they agreed with the statement “Now that my favorite television show is off the air, I feel more lonely.”

Finally, they were asked what activities they used to fill their leisure time in the absence of their favorite television programming.

The results found that more distress was experienced by those that felt a stronger connection to their characters. When their motives for watching TV were for relaxation, companionship, or escape, they also felt higher levels of distress than if they watched solely to pass the time.

Women in general reported having stronger relationships with television characters than did men, results showed. As such, one might expect that the loss of their programs would distress women more than it would men – but that was not the case. There were no gender differences in the level of distress caused by the strike.

“That’s probably the result of the different coping mechanisms that men and women use to deal with the dissolution of their relationships – both real and with TV characters,” Moyer-Gusé said.

In this study, women were more likely than men to say they spent their extra free time in social activities, such as spending time with friends and family, which may have helped them cope.

“We know that men and women cope with real breakups in different ways, and that difference may be translating to these relationships they have with TV characters,” she said.

Moyer-Gusé warned though that these TV ‘breakups’ did not match the distress of real breakups. But she did say this study focused on college students who had many more options for entertainment. The results may differ in groups, such as the elderly, who focus more on television for companionship.

The study was published in the April 2011 issue of the journal Mass Communication and Society.