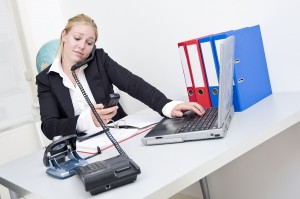 In today’s world of television, cell phones, computers, and other media, multitaskers typically praise their skill as an effective way to navigate this hundred mile an hour culture. Turns out, their confidence may be mistaken. According to a new study on media multitasking by Boston College researchers, multitasking is only driving people to distraction. So, how will this affect advertising when companies find out their potential customers are distracted from their message?

Placed in a room containing a television and a computer and given a half hour to use either device, people on average switched their eyes back and forth between TV and computer a staggering 120 times in 27.5 minutes – or nearly once every 14 seconds, Carroll School of Management professors S. Adam Brasel and James Gips report in a forthcoming edition of the journal Cyberpsychology, Behavior, and Social Networking.

“We thought it was going to be high, but the frequency of switching and amount of distraction going on was really shocking,” said Brasel, an associate professor of marketing.

Participants in the study predicted they would look back and forth between the devices about 15 times every half hour, but the results found it was actually more than 10 times that amount.

“What we found is that when people try to pay attention to multiple media simultaneously they are switching back and forth at an astounding rate,” said Brasel. “We’re not even aware of what we are doing when in multi-media environments.”

The results from the study have large implications for companies that spend their money advertising on television and the web. This being due to advertisements no longer having the same effect they once did now that consumers are simultaneously hearing several messages across multiple platforms, as opposed to the mono-media system of the past. In fact, surveys show 59 percent of Americans say they now use their computer and television at the same time. In addition, youths under 18 report this type of media multitasking is now the dominant mode in which they use both devices.

While the study showed that the computer was the dominant form of media because it held the attention of the participants 68.4 percent of the time, it sill does not prove itself a sufficient device for sending an effective message. Gazes only lasted a median average of two seconds for television and less than six seconds for computers. Also, these findings were not only for youth. They found similar results for those over 40 years of age.

What’s even more surprising is that this study did not include the mobile phone. Just imagine the results if that became a factor.

“Clearly, the rules we developed for the mono-media culture no longer apply,” said Brasel. “Our assumptions about how people are using media need to be updated. The era of the mono-media environment is over.”

What does that mean for advertising? How will things change? Will ads become shorter to match our attention span, or will they go to new lengths to hold our attention? What do you think? Please, share your thoughts in the comments below.